Professor Eric Kool and his co-workers have developed " eXpanded DNA " dubbed "xDNA". The synthetic xDNA is expanding by adding benzene molecule to the base on the nucleotides and is a bit longer than regular 'B' form. 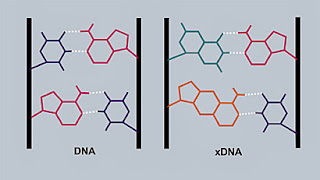 Unlike natural DNA, the expanded DNA is fluoresent and is considerably more stable when subjected to higher temperatures. Its unusual fluorescent properties could make it useful as a probe or diagnostic marker.

Is xDNA also capable of replicating? That's something Kool hopes to find out. Experiments with xDNA are expected to provide new insight into the behavior of natural DNA.

The solvent makes the difference

The solvent surrounding the chiral molecule create a chiral shell (Chiral Imprint). The chirooptical properties can orginate mainly from the chiral solvent shell rather than from the chiral solute. For example, (S)-methyloxirane has a positive optical rotation in water, but has a relatively strong negative value in benzene (P. Mukhopadhyay et al Angew Chem Int Ed 2007, 46, 6450-6452). 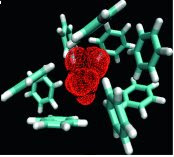 Computational experiments by J Neugebauer Angew Chem Int Ed 2007, 46, 7738-7740 shows the presence of the solute imprints a chiral structure on the inner solvation shell.
Posted by Shaji Varghese at 3:55 AM No comments: