The Negative Side of Boran

A molecule that hosts a negatively-charged boron atom could prove to be an exciting addition to the chemist's toolbox, according to researchers (Makoto Yamashita and colleagues at the University of Tokyo, Japan. Science 2006, 314, 113.) who have isolated the anion as its lithium salt.
Lithium can partner many of boron's neighbours in the periodic table, such as nitrogen in lithium amide, and carbon in methyllithium. But there have been no direct observations of the equivalent boryllithium compounds containing a negative boron atom. 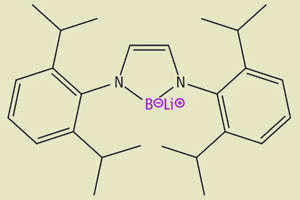 This type of boron anion shares the same number of valence electrons as its popular carbon cousin, the N-heterocyclic carbene. The Tokyo team demonstrated boryllithium's nucleophilic prowess in reactions with n-butyl chloride and benzaldehyde.
The work opens the door to new pathways in boron chemistry that will have a substantial impact on organic synthesis.
Posted by Shaji Varghese at 3:30 AM No comments:

Using functional genomic screen, researchers at Harvard Medical School have identified 273 proteins that the AIDS virus needs to survive in human cells, opening up new potential targets for drugs. Their work, published online on 10th Jan. by Science, used RNA interference to screen thousands of protein-making genes; previously, scientists had identified only 36 human proteins that the virus uses to break into cells, hijack their machinery and start reproducing.
The virus, which is itself only a short string of genetic material inside a protective capsule, can make only 15 proteins, so it has to adopt human proteins to its own use. Many of the proteins identified by the screen are already known to be important to cells in the immune system, which is the port of entry for H.I.V.

Posted by Shaji Varghese at 12:39 AM No comments: