Why are we made of only right-handed sugars? That has long been one of the biggest puzzles in understanding how life began, and this origin of homochirality in sugars and amino acids has been intrigued researchers for decades. So for convincing theory and experiment on the origin of homochirality are still lacking.
Armando Co´rdova and coworkers at Stockholm University, Sweden, used amino acid as a catalyst for the formation of hexoses sugars with >99 ee. Hexose’s have been suggested as building blocks of ancient RNA. It may be an example of the theoretical basis for the evolution of sugars' homochirality (right-handed configuration) in the prebiotic world.

Andrew Pohorille and Chenyu Wei at NASA Ames Research Center found that ribose permeates membranes an order of magnitude faster than its diastereomers. On this basis, it was hypothesized that differences in membrane permeability to aldopentoses provide a basis for preferential delivery of ribose to primitive cells for subsequent selective incorporation into nucleotides and their polymers. 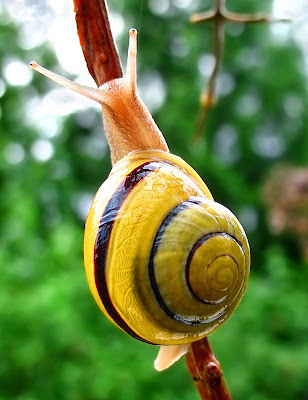 This homochirality can be observed on the macroscopic scale, for example, the helical chirality of snail shells (preferred right-handed) and the helical winding of some kind of plants.

"Most chemists believe, as do I, that life emerged spontaneously from mixtures of molecules in the prebiotic Earth. How? I have no idea. Perhaps it was by the spontaneous emergence of “simple” autocatalytic cycles and then by their combination. On the basis of all the chemistry that I know, it seems to me astonishingly improbable."

Email ThisBlogThis!Share to TwitterShare to FacebookShare to Pinterest
Labels: Origins of Life

Hey Shaji!
Great article on right handednes. Is it comparable to humans also. You see a lot of left handed humans & they do pretty well in life. any explanations? there is no difference in the sight of left or right eye also you don't hear differently from the left ear. You walk equal steps with your left leg compared to your right. If you go deeper your heart is always on the left. The most important building blocks of life, naturally occuring amino acids are identified by the rotation of light which is to the left. Infact some times the D-isomers are toxic. On a lighter note the leftist are the only people ruling West Bengal for a long time.
Any justifications?

thanx for great post. i kindly suggest you to link to DOI objects instead of www pages which path may change in time and the link is then lost. this is probabaly why link to Y J He's paper does not work any more.